The Games Create Editor is divided up into several screens. Each screen is focused on a different aspect of your game's creation.

The interface includes a menu at the bottom of the screen which you'll use to navigate and switch between screens while creating your game.

The menu used to navigate and use the editor.

The Game Screen is essentially a live preview of your game, within the editor. It's where you'll spend most of your time, putting together Events, Chats and/or setting up Locations (depending on your game's format). 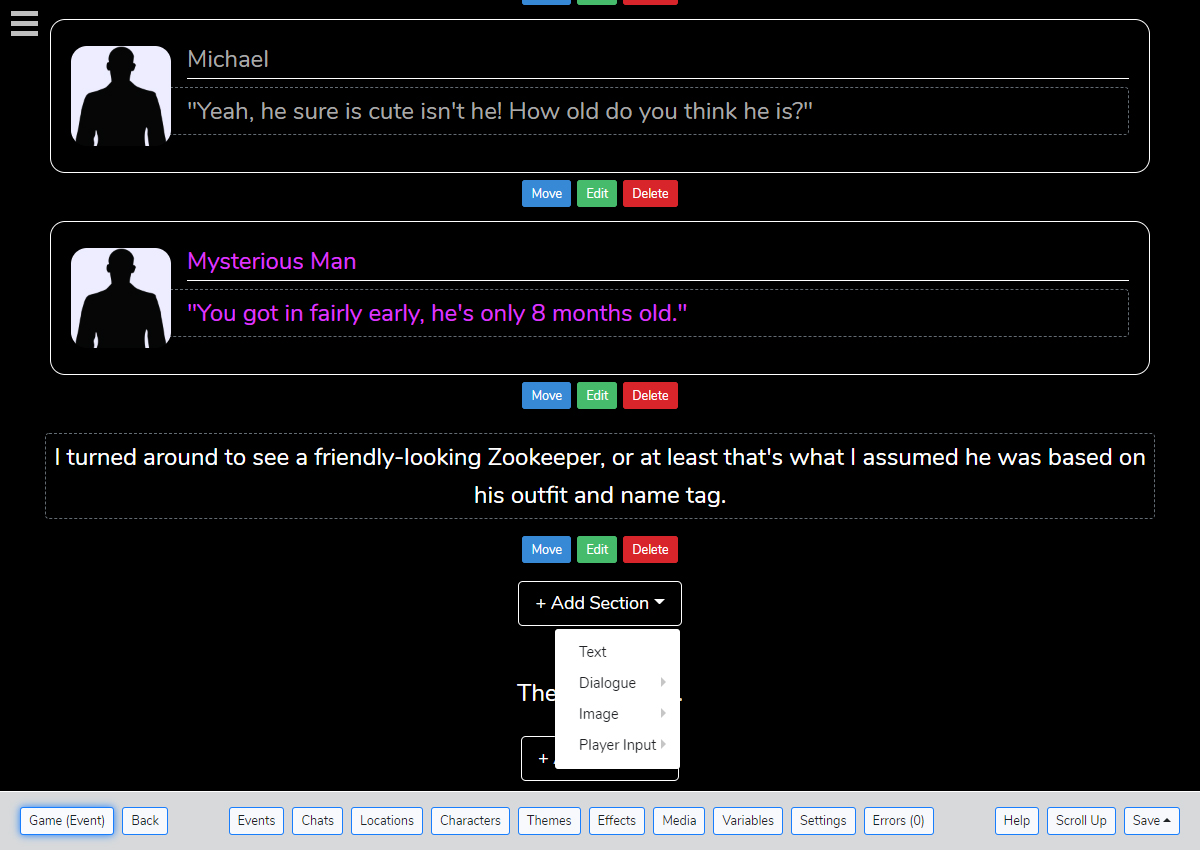 Putting together an Event on the Game Screen - select Add Section to add a new section.

We're currently working on an Event, which is indicated on the Game button on the bottom menu.

At the end of each Event, Chat and (optionally) Locations, players will make a Choice to continue in your game (moving from one screen to the next). As you add Events and Chats to your game, choices will be added automatically as needed. You can also add additional choices at any time.

Choices can be edited to include Actions which will affect what happens when the choice is selected, and Conditions to decide if the choice will be available to the player.

We're editing a choice. When it's selected in-game, it will trigger an action: Go To Event.

Tip: You may select choices to navigate, just as you would in-game, except that actions/conditions don't take affect. You can use the back button to return you to where you were before you selected a choice in the editor.

There are several other screens that you'll be working on within the editor. Most of them make use of a Tree View to organize things.

This is a Tree View containing our game's Events. In this example, there are two top-level Events in the tree view including Head to the Zoo and A new event chain I'm working on.... The other Events are Sub-Events (events that occur after another event).

Each Item in the tree view has it's own options for managing the item. You can change the Starting Event, Add a sub-event to the item, Go To the event on the game screen, Move the item up, down, left and right in the tree view, Edit the item's properties, Delete the item and also expand/collapse the item's children (sub-events) with the right-most icon.

The Events Screen is where you'll manage your game's Events. An event is something that happens or takes place. In the Games Create Editor, it is similar to a chapter or a page of a book. A sub-event is an event that occurs after another event. When one event leads to another event, this called a chain of events (or event chain).

Events can be re-arranged with the move button, edited and deleted. You can also assign the Starting Event (the event for which the game would begin at).

Tip: You can set which type of screen (Event, Chat or Location) your game will start at under Settings > Game Starts At.

The Chats Screen is where you'll manage your game's Chats. A chat is a conversation between two or more characters. In the Games Create Editor, it is a group of messages between characters. A sub-chat is a chat that occurs after another chat. When one chat leads to another chat, this called a chain of chats (or chat chain).

Chats can be re-arranged with the move button, edited and deleted. You can also assign the Starting Chat (the chat for which the game would begin at).

Locations can be re-arranged with the move button, edited and deleted. You can also assign the Starting Location (the location for which the game would begin at).

Probably the best thing about locations is the ability to add maps to them. A map is a visual representation of a location (or area) in your game's world. It requires an image to be selected. If a location contains sub-locations, you can optionally add selectable links directly onto the map's image which will navigate the player to each respective sub-location.

Let's have a look at an example of a location which includes a Map Image, with selectable/clickable areas. 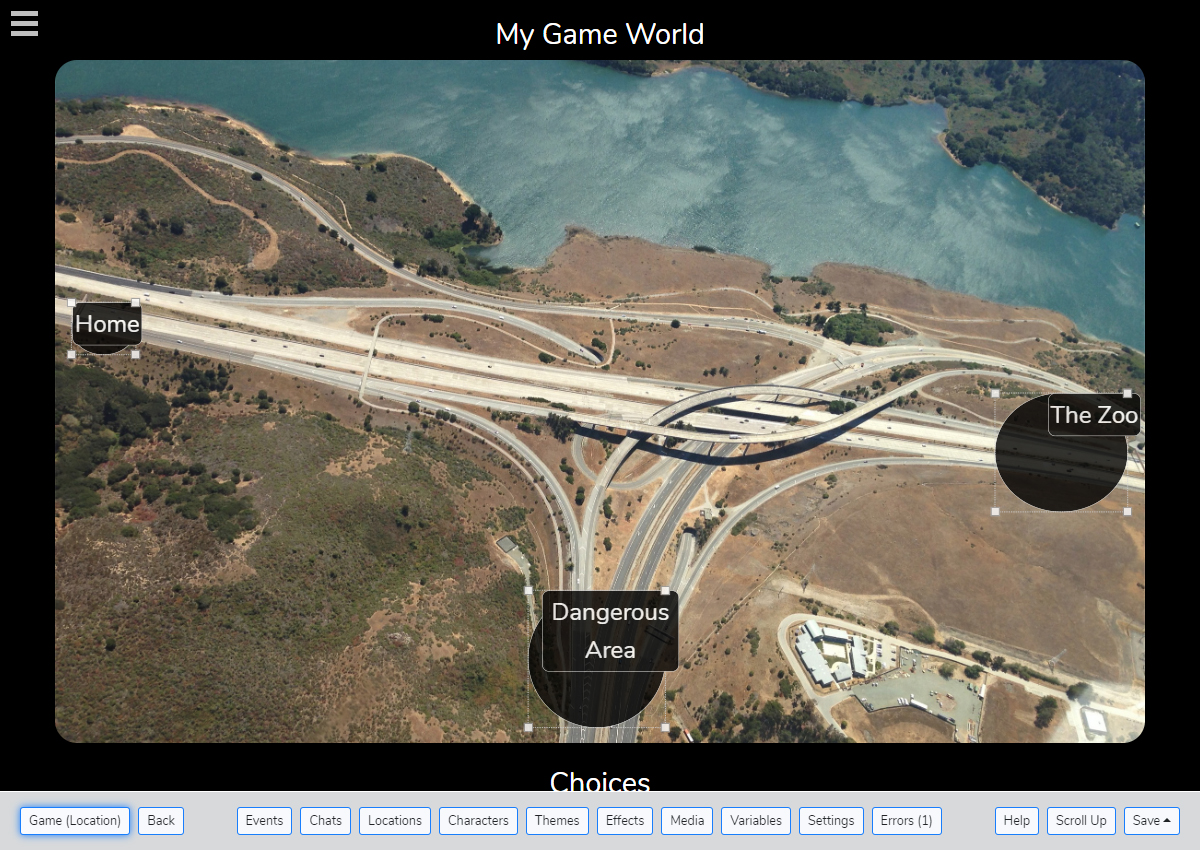 Let's see how it looks in Test Mode. 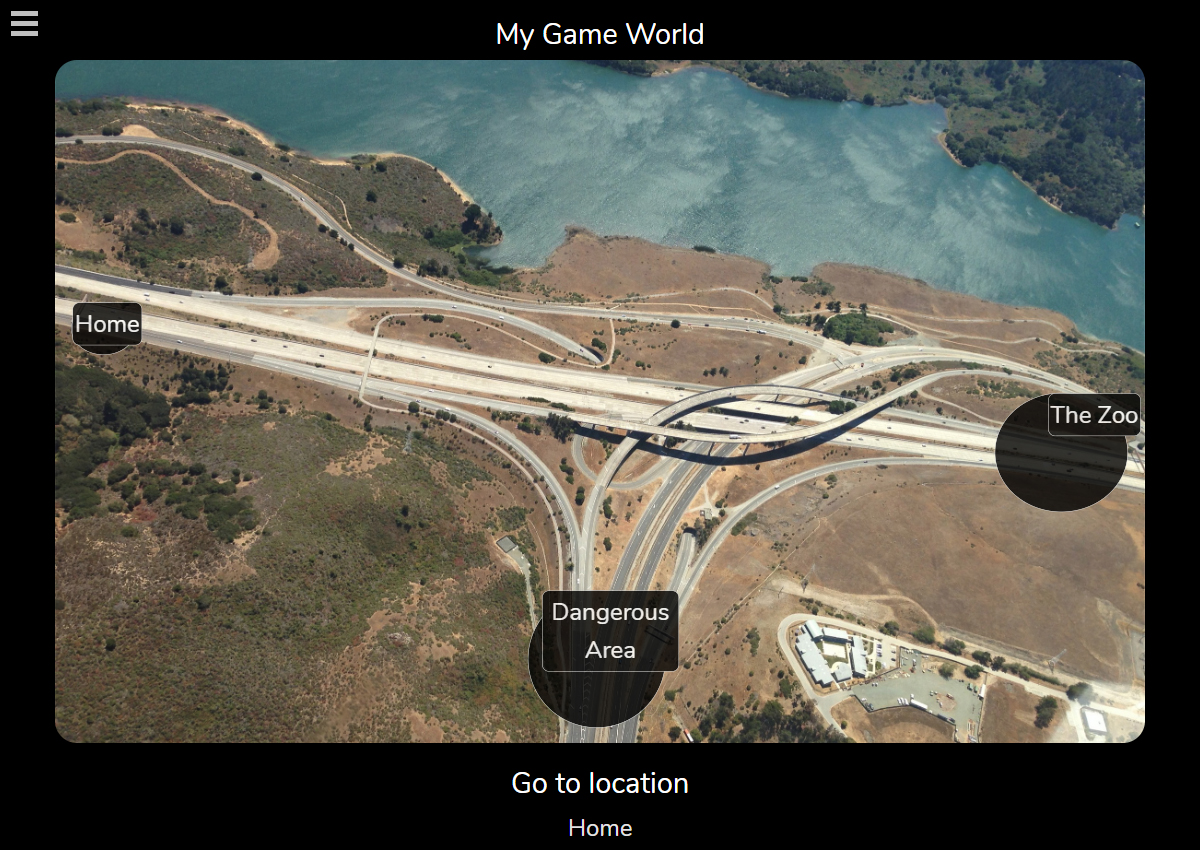 We can now select areas on the map to navigate to that sub-location.

Tip: When resizing a sub-location on a map, hold the shift key to lock the aspect ratio.

The Characters Screen is where you'll manage your game's Characters. A character is a person (or creature) in a game or story. In the Games Create Editor, character's can have their own first name, last name and image assigned to represent them. You can then add dialogues, messages and more to your game, linking to the character.

Tip: You can give a character a changeable name with variables, by selecting Use Variable First Name and Use Variable Last Name, or, you can create multiple characters with each desired name instead. You may also allow users to enter their own name with a Player Input section.

The Themes Screen is where you'll manage your game's Themes. Change the look and colors of your game by adding Themes. A theme is a collection of settings that alters the appearance of the game. The Games Create Editor comes with many pre-built themes included, and you can customize and add multiple themes to your game.

Let's try out a couple of different themes. 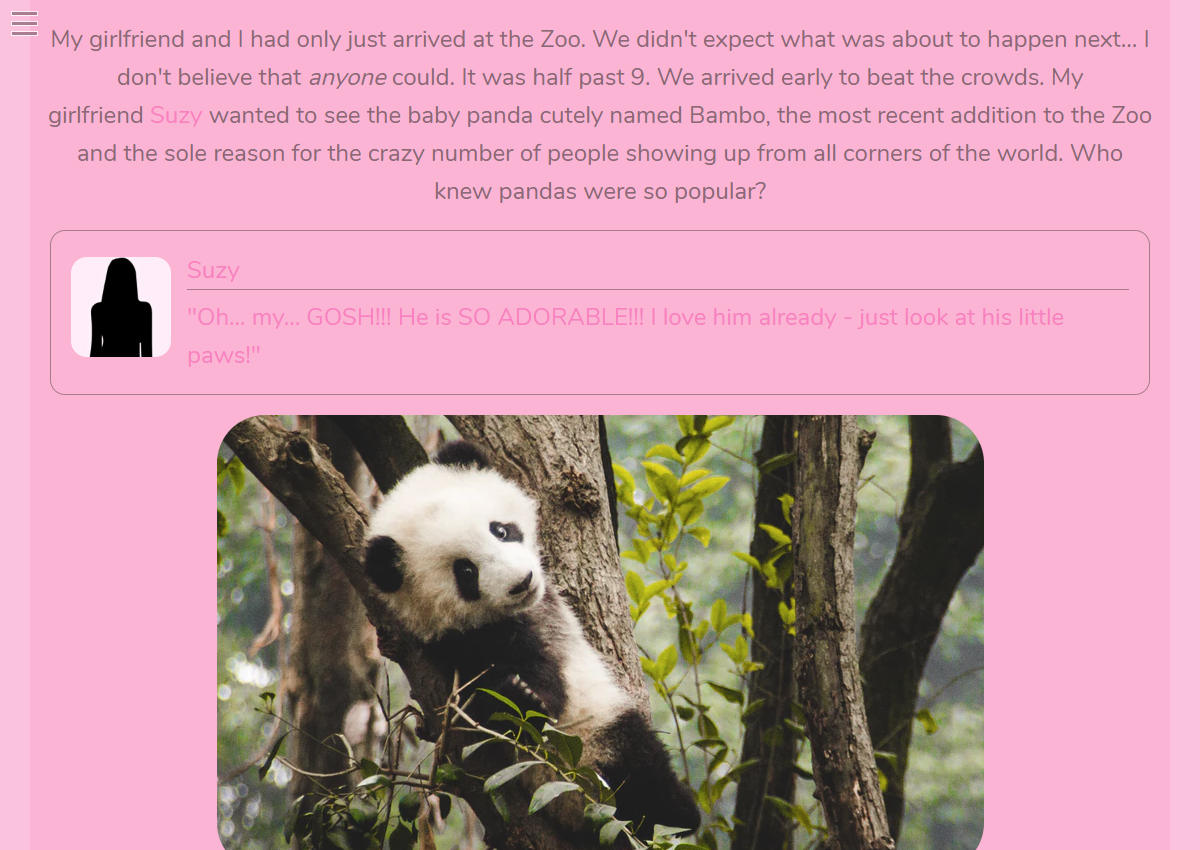 Changing the appearance of your game is really easy with Themes. 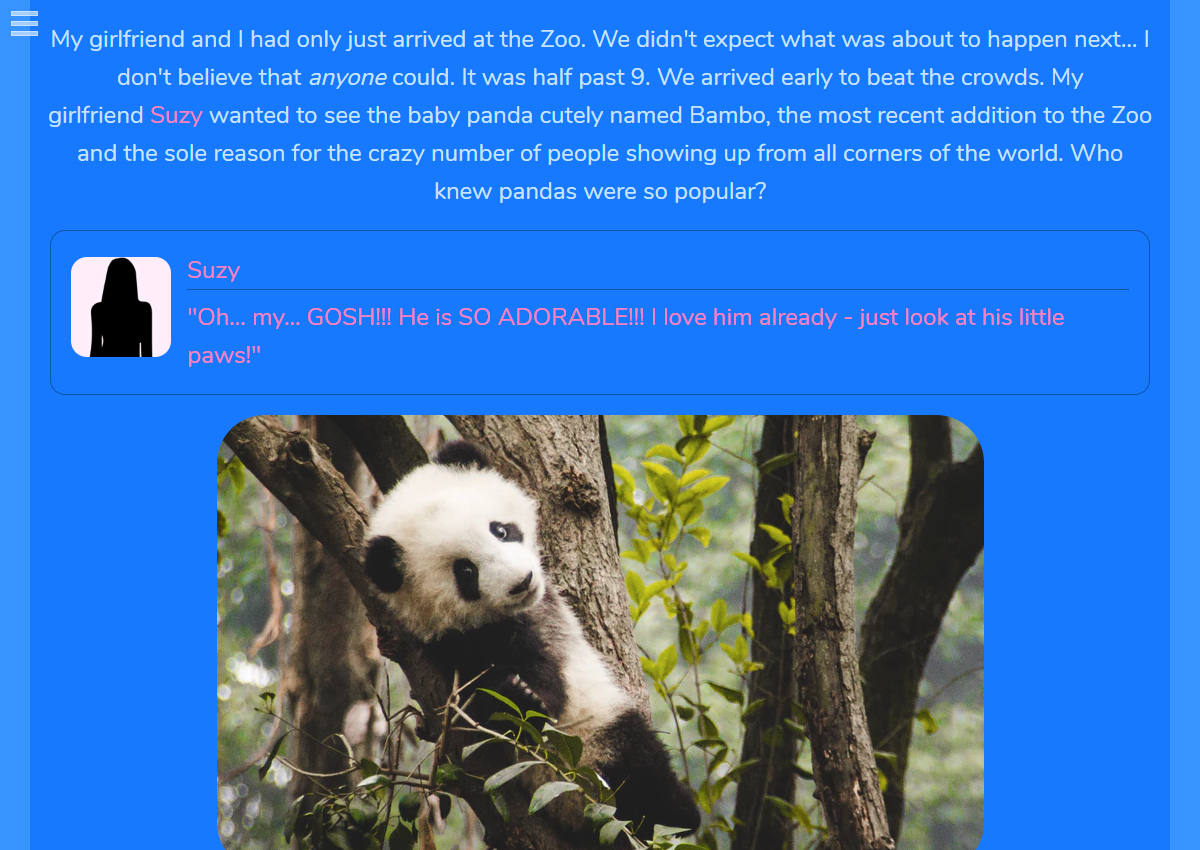 Make your game stand out with vibrant colors.

Tip: You can see how a theme looks right away by making it the Starting Theme and going to the Game screen.

The Effects Screen is where you'll manage your game's Effects. An effect (aka "Special Effect") is a visual trick, illusion or simulation of movement to parts of the screen that appears while playing, such as visual alterations, transitions and animations. You can add effects to different screens including screen transitions and scrolling effects.

Tip: All effects can be enabled and disabled under Settings > Effects > Show Effects.
Reminder: Effects are not displayed in the editor as they can be distracting while working on your game. To try out different effects, add them and select Save > Save & Test from the menu.

The Media Screen is where you'll manage your game's Media. You can add and manage Media images for use in your game. You can upload images, add images from a URL and also use images provided by the community. Images you upload can also be re-used in any of your other games, which can save you time, especially when making game sequels where you might have, for example, the same Characters (with the same images) as your previous games.

The Variables Screen is where you'll manage your game's Variables. A variable is a programming term. It is a value that can be changed to another value during gameplay. In the Games Create Editor, you might create a variable to hold the value of "Money" for the player and later increase the variable's value (give the player more "Money").

Tip: Variables are entirely optional, so don't stress - you can always try them out later.
Reminder: Can't see the Variables Screen? Make sure you change Settings > Features to All Features.

The Settings Screen is where you'll manage your game's Settings, which are organized into several different Tabs. Settings are options which can be set to better define how your game should operate and what your game is. Be sure to have a look at all the available settings when working on your next game and before releasing games.

Tip: Settings are applied immediately so you can see their effects on how your game looks right away on the Game Screen.

The Errors Screen is where you'll manage your game's Errors. Most errors found in your game will trigger an error to appear. While you can test games with errors, you won't be able to release them. This is a good thing - you want your players to enjoy your game and give you great feedback, not complain about simple mistakes such as forgetting to name a choice, or having a missing image.

Tip: You can jump straight to where the error is by selecting the Go To button on the error in the tree view.

The Help Screen is where you'll find information and helpful links for when you need help.

You can save your work by selecting the Save button on the menu. This button will drop-up a sub-menu where you can then select either Save, Save & Test, Save & Release or Save & Download. When releasing your game, you'll be taken to the release game form where you'll make any last minute changes before releasing your game.

You may download your game from the game's page when it's released and approved. You may also download your game, without needing to first release it on GamesCreate.com, with the Save & Download option (you'll need to upgrade to the premium plan to download directly from the Games Create Editor).

Tip: You can hide the "Return To Editor" link displayed when testing your game by deselecting Settings > Editor Preferences > Show "Return To Editor" In Test Mode.
Reminder: Be sure to save your work often and be careful when making major changes to your work.

You should now know everything you need to to dive into making your own game or story, however if you want to keep reading...

Next Up: Managing Games
Guide